What to Know About LGBTQ+ Mental Health

For many of those in the LGBTQ+ community, mental health is a significant issue. According to the Substance Abuse and Mental Health Services Administration, lesbian, gay, bisexual and trans adults are more than twice as likely to experience mental health conditions as their heterosexual and cisgender counterparts.

Persistent stigma is a central factor in this demographic’s vulnerability to mental illness, even though more people now openly identify as LGBTQ+ than ever before. Gallup polls revealed 4.5% of Americans claimed an LGBTQ+ identity in 2017, up from 3.5% in 2012. To provide the right support and mental health treatment for our LGBT friends, family members and neighbors, it’s essential to understand who they are and what unique challenges they face in navigating the world.

You may have noticed the acronym LGBT expanding over the years to include Q and sometimes a plus sign. While the label has changed a bit, the LGBTQ meaning has largely stayed the same. The core letters stand for lesbian, gay, bisexual and transgender, and you will often see the acronym used the same way with or without the Q.

There is some debate and room for interpretation when it comes to the Q. Some people use it to self-identify as “queer,” while others use it to refer to “questioning.” Here’s a breakdown of what each term in the acronym means.

While the LGBTQ+ acronym is an umbrella description that encompasses both gender and sexuality, adding the plus sign puts many many other identities under the rainbow flag. There are as many self-identification terms as there are unique identities. Nonbinary people, for example, don’t feel fully represented by the male-female dichotomy and may prefer the pronoun “they.”

Asexual people don’t experience sexual attraction, but since they are not heterosexual, they often fit under the LGBTQ+ umbrella. These are just a couple of the many identities the LGBTQ+ acronym embraces.

Gallup has only been tracking LGBTQ+ identification since 2012, but there are already some valuable trends emerging. The 2018 report reveals these noteworthy details about LGBTQ+ demographics today:

Women, people of color, low-income individuals and young adults are the most common faces in the LGBTQ+ community. A critical gap in the demographics is the fact that survey respondents are almost always adults. However, following the trend of younger people being more likely to claim an LGBTQ+ identity, it’s clear there is a sizable and growing community of LGBTQ+ youth.

The Unique Circumstances of LGBTQ+ Youth

Growing up with an identity other than heterosexual and cisgender is not easy. LGBTQ+ stereotypes are everywhere, and seeing them over and over can damage mental health in the long run. The Human Rights Campaign set out to learn just how profound an impact LGBTQ+ identity has on young people by taking a survey of more than 10,000 youth between the ages of 13 and 24. The report brought these LGBTQ+ youth statistics to light:

Being a teenager is challenging enough, but having a sexual orientation or gender identity outside the mainstream makes life harder. When kids aren’t sure if their family and friends will accept them for who they are, they suffer socially, emotionally and academically. Bullying is one of the top factors that contribute to the risk of mental illness in LGBTQ+ youth. The 2017 Youth Risk Behavior study from the Centers for Disease Control and Prevention sheds some light on the situation with these sobering youth LGBTQ+ statistics:

While the LGBTQ+ bullying statistics above refer to incidents with their peers, students also have to worry about faculty and staff. Transgender students often suffer the worst of this because their identity is easier to spot, especially before they begin taking hormones. Trans students often have to deal with harassment about the restroom they choose to use, and may have trouble getting teachers to use their preferred name and pronouns.

Acceptance from teachers and other staff members can set an inclusive tone for LGBTQ+ youth at school. Likewise, antagonism from authority figures can pave the way for more bullying from other students. Research from Lambda Legal states that when LGBTQ+ students report harassment or assault, 36.7%t said staff took no action.

Mental Illness in the LGBTQ+ Community

LGBTQ+ depression and anxiety are common in individuals of all ages, but they can be particularly damaging to youth. Recent estimates suggest there are substantial LGBTQ+ mental health disparities. LGBTQ+ depression statistics include the fact that this group is more than twice as likely to suffer from the disorder and other mental health conditions. About 10% of these youth have a mood disorder like depression, and 25% have an anxiety disorder. Multiple studies provide overwhelming evidence that LGBTQ+ youth are at an increased risk of these mental illnesses than their peers.

These kids have no shortage of sources for LGBTQ+ anxiety. One of the most common is the fear of coming out. Often, young people feel they need to hide their sexual orientation or gender identity because they are uncertain how those around them will react. For some, there is a legitimate fear of violence from parents or other close family members. Others may be afraid their family will be unhappy with them or try and force them to alter their identity.

The social aspect of being LGBTQ+ can also cause intense worry that leads to anxiety. Adolescents are in a critical developmental phase where their peers’ opinions disproportionately affect them. Kids may agonize over the idea of coming out if they aren’t sure their friends will accept them. According to the Growing up LGBTQ+ in America study, 75% of youth respondents say most of their peers don’t have a problem with their LGBTQ+ identity, but it can still be nerve-wracking to come out at school.

Fears over bullying and lack of acceptance may fuel anxiety, but they also contribute to major depression. Depression in LGBTQ+ youth often results from feeling misunderstood or rejected. One study indicates that among heterosexual students, 19.3 to 29% report feeling sad or hopeless. For lesbian and gay students, the range is 47.2 to 52.8%. Bisexual students had the highest incidence, ranging from 47.2 to 62.9%.

Suicide in the LGBTQ+ Community

Unfortunately, many members of the LGBTQ+ community have less access to mental health care than other groups do. There is also some remaining stigma in many pockets of the mental health world, making some individuals afraid they will face discrimination from a provider.

When mental illness goes untreated, a person’s risk of suicide increases. The LGBTQ+ suicide rate is exceptionally high, and the problem is growing among youth. The Trevor Project offers these insights about suicide in LGBTQ+ youth:

The adolescent years are a crucial time for LGBTQ+ suicide prevention. Chronic depression and anxiety, coupled with the feelings of powerlessness that come with being a minor, can culminate in self-harm or suicide if not treated. Trans youth are particularly at risk because their parents or physicians often do not allow them to physically transition until they reach 18, and the intense body dysphoria they experience is an added element their cisgender peers don’t have to deal with.

If you or someone you know is displaying signs of suicidal thinking, it’s imperative to get professional help as soon as possible. For immediate support and assistance, call the Suicide Prevention Lifeline at 800-273-8255. The LGBTQ+ suicide hotline service has resources for Spanish speakers as well as the deaf and hard of hearing. For those who are uneasy on the phone or who can’t talk on the phone for safety reasons, Lifeline offers an online chat service. LGBTQ+ suicide is preventable if the person receives treatment in time.

How You Can Help 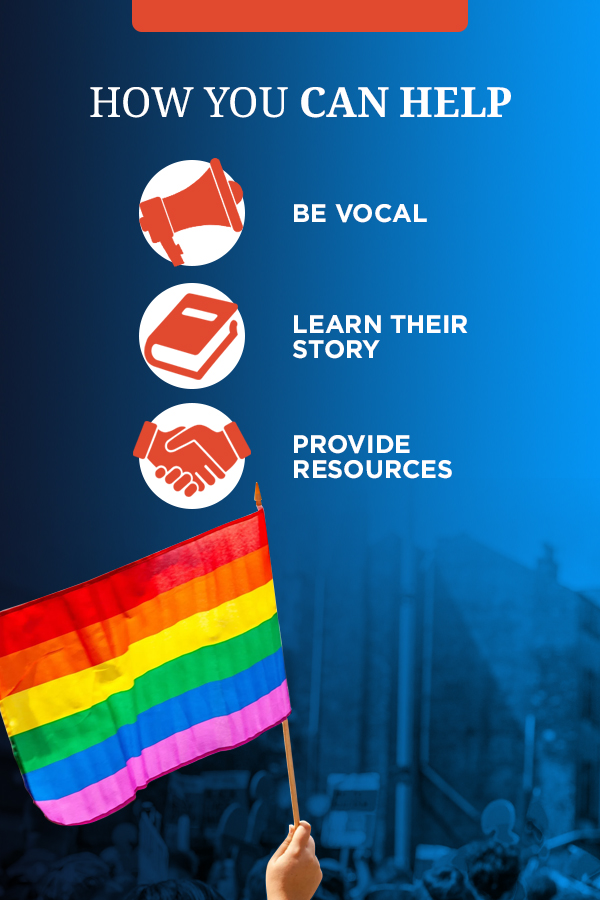 As someone in a counseling role, you can be a critical source of support for LGBTQ+ individuals struggling with mental health issues. Here are three things you can do to make LGBTQ+ youth feel safer and more confident.

It takes specific knowledge to successfully support LGBTQ+ individuals and serve their mental health needs. Hillside Atlanta is committed to giving our patients the respect and compassion they deserve throughout treatment, and we’re showing it by working toward a Human Rights Campaign seal of recognition.

With multiple campus-wide sessions, we have trained both our staff and clinical team on appropriate care so we can provide a safe and affirming environment for treating our youth LGBTQ+ patients. No matter what they are struggling with, we strive to apply best practice strategies to provide care that accommodates each patient and individualized needs. Our patients receive the best in mental health care without fear of judgment or discrimination based on their identity.

If you’d like to know more about how you can help the LGBTQ+ youth in your life, or you know someone who is interested in mental health treatment environment a safe and affirming, contact Hillside today.