Adolescent suicide can be a difficult topic to face, but it is one of the most important concepts for parents and guardians to recognize to protect their loved ones. Many people live with the false idea that when teens make statements about suicidal or self-harming, they’re only doing it for attention. As a parent, you should take these statements seriously.

As you’ll learn throughout this article, suicidal statements are one of several signs that your child may be at risk of attempting to take their own life. Some of the other signs can be more subtle but are just as important to notice and address. Given the right help, your child can see that their life is indeed worth living.

Many teens struggle with life-threatening behaviors, which may include having suicidal thoughts and gestures. Unfortunately, this alarming struggle has increased in recent years. The Centers for Disease Control and Prevention (CDC) states that the suicide rate for people aged 10 to 24 has risen 57.4% since 2007. Without the right support system and treatment, teens may act on their suicidal thoughts. This can lead to serious injury, further family trauma, and death.

According to Kansas State University, suicide is the third leading cause of death for those aged 15 to 24. These numbers become even more severe when you consider adolescents dealing with depression. In fact, over half of youth who suffer from depression may attempt suicide at least once, which results in a 7% mortality rate — half of which include a firearm.

If your teen has been misusing alcohol or drugs, then you know how much effort goes into overcoming those addictions. But it’s also important to know how this drug and alcohol abuse can affect suicide rates. The same findings from Kansas State University reveal that 53% of adolescents who commit suicide already have a preexisting struggle with substance misuse.

On top of all these statistics, Kansas State University found that depression also affects suicide rates. A young person is 14 times more likely to attempt suicide for the first time if they are experiencing depression. These stats show how important it is to be aware of your teen’s risk factors so you can intervene before thoughts become life-threatening behaviors or gestures.

Teen suicide risk factors are variables or experiences that could make a young person more likely to think about attempting suicide. More risk factors present in a teen’s life could raise their chances of viewing suicide as the answer to the problems and struggles they are facing. Becoming aware of these risk factors can help you as the parent or guardian take the next step toward suicide prevention and the road toward recovery for your child.

Here are some of the most common teen suicide risk factors:

After determining if your child is at risk based on the list above, you need to be on the lookout for warning signs. Some life-threatening behaviors are more obvious than others, but they all show that it’s time to get your adolescent the help they need. 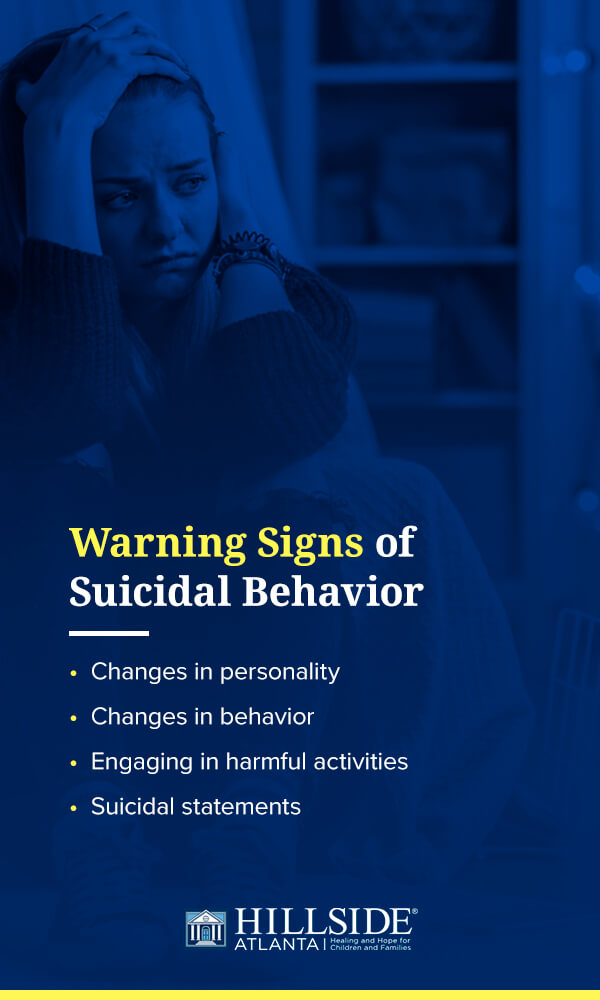 Here are some of the warning signs of suicidal behavior, including life-threatening thoughts and behaviors, in teens:

The good news is that you and your child both have the ability to take the road to lasting positive change. Each of the following actions can make a difference in your teen’s life, so it’s important that you engage in as many of them as possible. And if your teen is struggling in any of these areas, now is always the best time to seek help to achieve a healthier, happier life. Here are some of the most important teen suicide protective factors:

What to Do if Your Teen Is Suicidal

If you know your child is struggling with life-threatening behaviors or has attempted suicide in the past, there is hope. Now is the best time to take action. You can come alongside your teen and help them through this difficult time by giving them the help and treatment they need.

Here are some of the ways you can help your loved one:

The Effect of COVID-19

The COVID-19 pandemic and related events have been hard on everyone in one way or another. This includes teens who saw their schooling disrupted, missed out on valuable time with friends and felt isolated during hardships. Many adolescents experienced deep loss as a result of COVID-19 taking away their loved ones. Others felt their existing depression become worse as a result of lockdowns and quarantines keeping them from getting the essential vitamin D they need for positive mood stabilization.

Everyone’s experience has been different during the pandemic, but one thing remains clear. COVID-19 has caused an increase in mental health concerns, including depression and other psychological conditions. This has led to an increased risk of suicide in teens, especially females.

Parents and guardians are encouraged to be even more aware of their child’s well-being during the difficulties of the pandemic as it continues. Take more time to talk and be aware of the items around your house that could pose a risk to your teen. Now could also be the time to reach out to a trusted DBT provider.

Contact Hillside® to Help Your Teen Experience a Life Worth Living

Hillside offers a comprehensive continuum of care for teens experiencing emotional, mental and behavioral concerns that lead them toward self-destructive behavior. We are one of Atlanta, Georgia’s oldest non-profit organizations after our establishment was founded over 130 years ago. Since then, we’ve continued to give Atlanta and the entire state of Georgia therapy treatment programs to help adolescents who need it most.

We invite you to contact us today and speak with a clinician about your situation and needs.

Posted in Self Harm, Suicidal Thoughts